I’ve found that in order to get x11vnc to work with the Mac OS X built-in VNC client (“Screen Sharing Application”), there options are required when starting the VNC server:

The -shared option is key here. Judging by the log on the VNC server, I think Mac OS X will attempt multiple connections.

For what it’s worth, here’s also how to auto-start the VNC server when the user logs into the LXDE desktop. Copy and paste this to ~/.config/autostart/x11vnc.desktop: 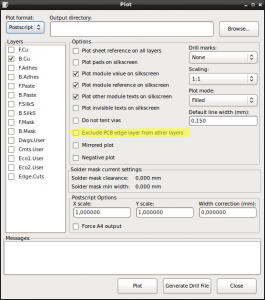 Here’s a quick reminder of the commands that I use to switch between a single monitor setup (internal laptop screen) and two external, DVI-attached monitors on my ThinkPad W520 running Ubuntu 14.04 (x86_64).

In order to switch to single-screen setup:

Switching to the two external monitors:

All of this uses the stock, Ubuntu-provided driver. Didn’t have much success with the nVidia drivers (from the repositories) on this laptop.

I own a small FPGA Board by Avnet with a Spartan 3A FPGA on it. The board is nice, but unfortunately, the flash chips on the board aren’t on the JTAG chain. Instead, there is a small PSoC microcontroller that lets you programm the flashes via UART. There is a Windows tool to perform that programming which is shipped with the board. Here’s what I did to program the SPI configuration flash on Linux.

Via the FPGALibre site, I found a link to a tool called ASTriAEKiPro, which allows me to write to the FPGA SPI Configuration flash via UART and the PSoC microcontroller.

Compiling the tool is as simple as running this command:

To erase the SPI configuration flash, I used this command:

To write a configuration to the SPI flash:

The tool requires SWT which is installed in /usr/lib/java on my system. To start the tool, used the following command:

At work, I got a new laptop — a Lenovo W520. It came with Ubuntu 11.10 ("Oneiric Ocelot") pre-installed by the support team. My first impression was that it worked pretty well, but I quickly discovered that I couldn’t change the brightness of the display through the Fn+Home/End keys.

The W520 uses this “Optimus” technology with an integrated on-board graphics card plus a separate NVIDIA card, where both cards can be switched on-the-fly — on Windows. The default installation used the high performance card and I suspected that the video card driver was keeping me from adjusting the brightness. As it turns out, after switching to the on-board Intel card, things worked fine. Here’s what I needed to do:

First, I needed to disable the NVIDIA card in “the BIOS” and switch to the on-board card. There’s an option somewhere under “Setup”, then “Display”, if I recall correctly.

Next, I changed the video card section in my /etc/X11/xorg.conf to read this:

In fact, I added the two Option lines later on and only changed the Driver line at first. I then discovered that most of the little try icons in the upper right corner of the Gnome desktop wouldn’t show anymore. A look at /var/log/Xorg.0.log turned up some errors and running glxinfo yielded lines like these:

Luckily, someone else ran into the same issues over at http://theiszm.wordpress.com/2010/06/27/glx-missing-on-display/. As indicated there, I also ran these commands:

The first command hinted that some "ubuntu-desktop" package would also be removed. I don’t know what that is, but I don’t miss it, yet. Anyways, after a final reboot, the brightness adjustment now works and all my tray icons are back in place.